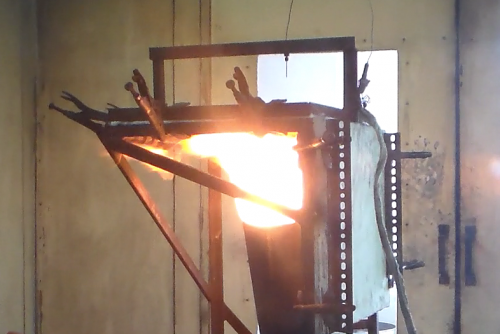 LIBIK fabrics being subjected to an FAA cargo liner test – the extreme in flame testing.

When the singular focus of your business is rapid battery fire suppression, you get pretty passionate about the effectiveness of the materials you use. After all, you are only as strong as your weakest link. Dylan Vandemark, VP of Product Development, knows the safety of airline passengers and crew are at stake. So when it comes to the integrity of our LIBIK (Lithium Ion Battery Incident Kit) fabrics, he tests them to the extreme.

Last week CellBlock completed experimental testing with an FAA lab on the LIBIK fabrics. It was a variation of FAA/DOT 25.855, Appendix F, Part III – a cargo liner oil burner test that runs for 5 minutes at 927 degrees celsius (1700 degrees Fahrenheit). This test is excessive. The cargo liner oil burner test was an entirely different level of heat exposure and is not typically performed on textiles. After the fabrics passed this 5 minute test, Dylan decided push the envelope. At his request, the lab completed an additional 30 minutes of testing during which there was no indication of fabric failure. Performing this procedure on textiles was previously unheard of. It’s an indication of just how incredible these materials are.

Was this level of testing necessary? Absolutely. Our fire suppression kits contain CellBlockEX, a unique and powerful dry extinguisher that works very rapidly to mitigate the event. So there is minimal chance the LIBIK suppression/containment bag would ever be exposed to the high heat from a thermal runaway, much less a half hour of intense flame. However, our Fire Shield Blanket also relies on these extremely robust fabrics, and is arguably the most important tool in our kit. Protecting the crew member/firefighter is a priority. These fire retardant blankets effectively provide an impervious barrier between personnel and a battery fire.

It’s important to keep in mind no thermal runaway event is ever the same. Lithium-ion battery fires burn very hot and are nearly impossible to extinguish by traditional means. The integrity of the fabrics in our fire suppression kits and fire retardant blankets is crucial, which is why we use some of the best materials in the world.