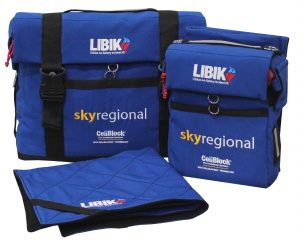 Sky Regional chose LIBIKs for fire-suppression in the passenger cabin and flight deck.

As part of its ongoing mission to ensure the highest level of safety on its aircraft, Sky Regional Airlines, which operates under the Air Canada Express banner has installed CellBlock Fire Containment Systems’ LIBIK (Lithium-Ion Battery Incident Kit) as an onboard tool to mitigate the risk of lithium-ion battery fires, becoming the first schedule airline to adopt CellBlock’s LIBIK kit. While the incidence of lithium-ion fires from personal electronic devices (PEDs) is statistically infrequent, it is nonetheless a concern for airlines in an increasingly mobile and battery-powered world. Manufactured by CellBlock Fire Containment Systems, the LIBIK is a complete fire-suppression tool kit that contains a fire shield blanket and fire-suppression pillows, as well as personal safety equipment. It provides a means to protect passengers and crew, while effectively extinguishing a thermal runaway with a dry granulate that is environmentally and biologically friendly. “Technology innovation is important in helping us ensure our fundamental goal of passenger and crew safety,” Brent Card, Sky Regional’s Vice President of Flight Operations announced on Tuesday. “We selected CellBlock’s solution for the high degree of protection it afforded, its ease of use, and its ability to extinguish fires without the use of water.” “CellBlock developed this technology to provide an environmentally sound solution that helps mitigate the potential for in-flight lithium-ion battery fires quickly and efficiently,” said Dylan Vandemark, CellBlock’s VP of Product Development “We are very pleased that Sky Regional has implemented the use of our cutting-edge solution on its flights to offer passengers and crew an additional layer of safety of security when they fly.” ABOUT SKY REGIONAL One of Canada’s leading airlines, Sky Regional Airlines operates a fleet of Embraer 175 jet aircraft servicing domestic and trans-border flights under the Air Canada Express banner.