Why is a lithium fire worse than a regular fire? 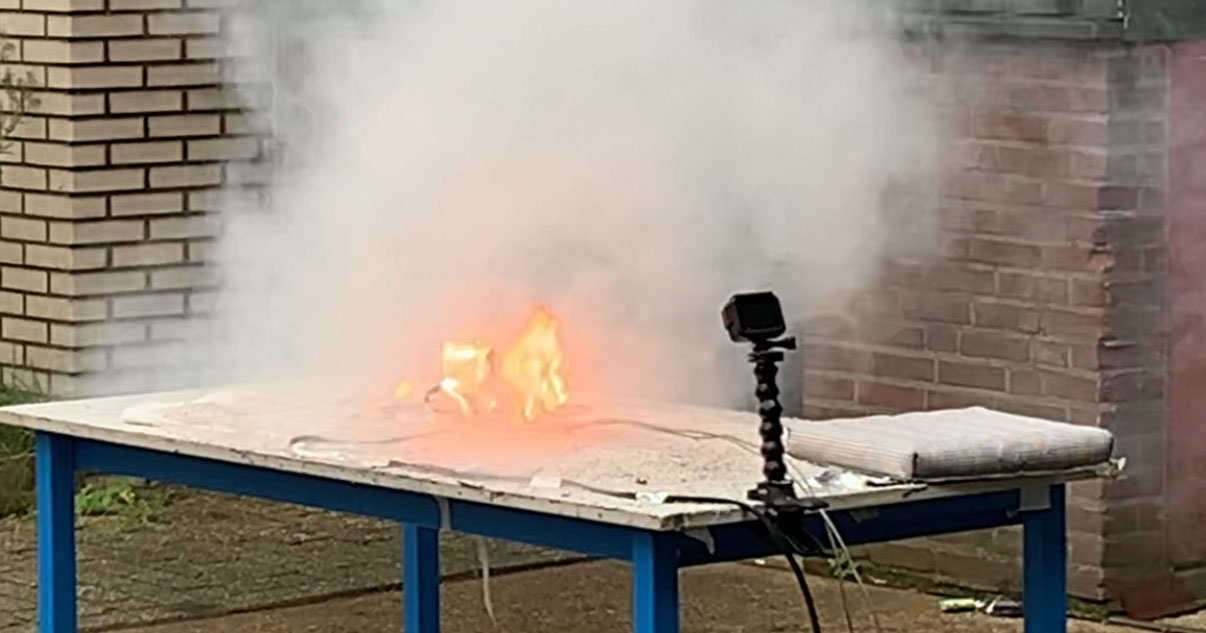 A lithium-ion battery fire in a controlled environment. Do not try this at home.

I doubt I have to explain this to you, but uncontained fire is generally bad. There are numerous obvious exceptions, but virtually every unintentional fire is cause for alarm, both literally and figuratively. Since humans first harnessed the power of fire some 230,000 to 1.5 million years ago, depending on your sources, societies and organized groups have devised plans and protocols delineating instructions on what to do if a fire breaks out.

Why lithium fires are more dangerous than typical fires.

Put simply, a lithium fire is difficult to extinguish, mainly because of the way lithium reacts with water. Immediately upon contact with water, lithium produces hydrogen gas and lithium-hydroxide. If you’re into chemical equations, it looks something like this:

Lithium-hydroxide isn’t typically threatening. Overexposure can cause skin irritation or eye damage, but these aren’t major concerns to a fire-fighter dousing a lithium-ion battery fire, especially considering lithium-hydroxide is water soluble. The hydrogen gas, however, is a significant obstacle due to its extreme flammability. Because lithium reacts with water to create a flammable gas, pouring water on a lithium fire is often counterproductive and very, very dangerous.

In the instance of a leaking lithium-ion battery, exposure to air or moisture can even produce hydrofluoric acid, which is highly toxic, and can severely irritate the eyes and lungs.

Furthermore, lithium floats in water due to its low density, so smothering or submerging a lithium fire can be troublesome. It’s not entirely relevant to someone extinguishing a burning electronic device, but lithium batteries and components can come in many shapes and sizes, so it might be important to know in an oddly specific emergency. Plus, science is cool and we like talking about nerdy stuff like group 1 alkali metals.

Another factor adding to the risk of a lithium fire is that lithium batteries have anannoying habit of exploding. Lithium-ion batteries are designed to produce an optimal charge at a minimal weight, which essentially calls for the thinnest possible casings and partitions between cells. This optimization leaves little room for durability, so interior or exterior components of lithium batteries can easily be damaged or penetrated. Additionally, an overheating cell can rapidly expand and explode, often before safety measures can be implemented. Wanna see? It’s actually pretty neat to watch a lithium battery explode in a controlled environment.

In an uncontrolled environment, however, it’s legitimately terrifying. Metal fragments can jettison from a lithium battery explosion. This is yet another factor that makes lithium fires far more dangerous than normal fires, especially when you consider that lithium batteries are often used in multiples. If one battery explodes, there’s a high probability more batteries will explode. In the case of a lithium ion battery fire, a heat resistant blanket can protect personnel by preventing metal shards from flying about.

So what’s the best way to extinguish a lithium fire?

The Federal Aviation Administration previously recommended the use of halon and water to extinguish lithium fires, but halon was largely discontinued due to its ozone depleting effects. The halon and water method also produces a substantial volume of smoke and harmful fumes, which isn’t an enormous complication if evacuation is a convenient option, but if your lithium fire occurs in an aircraft cabin for example, this solution is unacceptable. In most cases, a dry fire suppressant is preferable.

CellBlock FCS offers a dry fire suppressant granulate called CellBlockEX that has been proven to extinguish lithium-ion battery fires quickly and safely while containing smoke and hazardous fumes. Plus, our PED-Pads and LIBIK incident kits provide delivery methods for many common types of lithium-ion battery fires. See how our CellBlock products compare to the standard fire suppression methods such as vermiculite. Spoilers: CellBlock is superior, and we don’t feel the need to be humble about it.